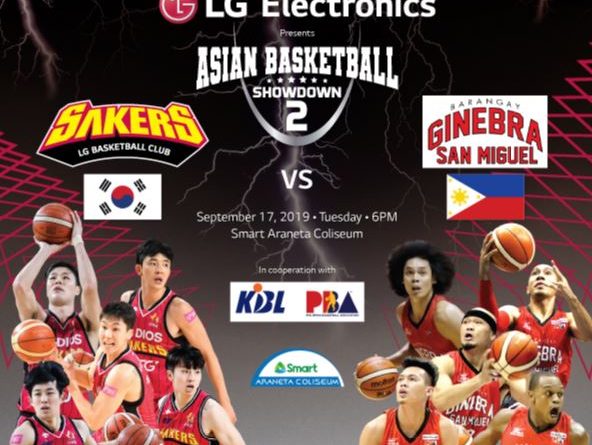 Basketball season is in full swing! Five years after their last meeting, worlds collide yet again as two of the most popular basketball teams in Asia face each other once more. The LG Sakers, one of the stalwarts of the Korean Basketball League (KBL), is set to face what is arguably the country’s most beloved PBA team – the Barangay Ginebra San Miguel.

Dubbed as Asian Basketball Showdown, the first exhibition game between the two teams happened 5 years ago and was received very well by the appreciative crowd. It was a landmark event that pitted perennial crowd favorites in their respective leagues. The LG Sakers is one of the most well-supported teams in the whole of South Korea while Barangay Ginebra is a pillar in Philippine sporting history. To have these two teams face against each other is a dream come true for every fan of basketball.

While the LG Sakers bested Barangay Ginebra in their first foray five years ago, the Filipino squad is determined to pull out all the stops to ensure an enjoyable game for the crowd and hopefully, get a win on home court.

A big fan of basketball himself, LG Electronics Philippines Managing Director Inkwun Heo says “In the spirit of celebration of the 70th anniversary of South Korean and Philippine diplomatic relations, we want to treat Filipinos to an experience they’ll never forget. ”

Just like the first showdown, the exhibition game is still a free event courtesy of LG Philippines. To find out how to get a free ticket, click this Asian Basketball Showdown 2 for the full mechanics.