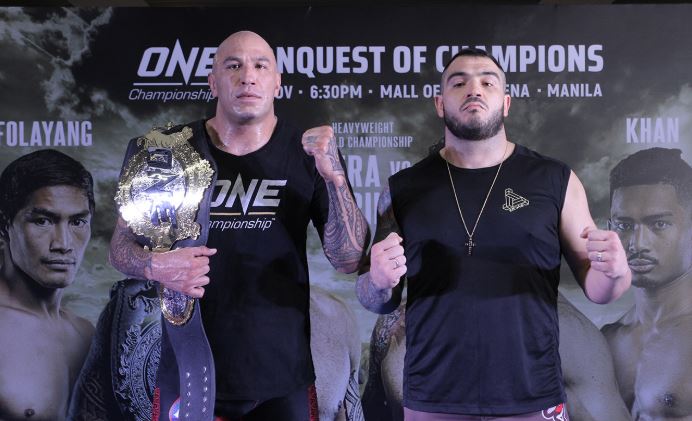 At the recent media workout for the approaching ONE Championship’s mega fight dubbed “Conquest of Champions,” the main event and co-main event fighters showed off (or not – strategically) their fighting prowess to the delight of eager press people. First to the stage is Amir Khan, a Muay Thai fighter with a blue belt in Brazilian Jiu-Jitsu. Having no reservations, the young Singaporean immediately hits the Thai pads held by Coach Eduard Pamplona with such force, the head coach of Evolve MMA Team braces himself every single time.

Shortly after Khan’s exit came to Eduard “Landslide” Folayang, he addressed the crowd beaming with confidence. Thanked everybody for coming and promised an exciting fight come Friday, November 23, 2018, at the Mall of Asia Arena. He started slow, warming-up with dynamic movements to prepare his body. After that, Folayang did his basic routine a little laid-back, not revealing the whole of his arsenal.

Then came the Main Event fighters. First was Mauro Cerilli, the heavy-handed Italian showed why he is called “The Hammer.” Shadowboxing for his warmup, he promptly proceeded to hammer the pads with his trainer. With his feet planted firmly, he uncoils with impressive jabs, straights, and hooks, even giving the crowd a sample of his ground and pound moves.

Finally, the Heavyweight Champion was invited to the workout area in front of an excited crowd. Brandon Vera, whose towering six foot-3 inch muscular frame intimidates the hell out of anyone he gazes at. That is, however, until he smiles. Wowing the crowd with his signature moves and technical footwork. “The Truth” showed excellent head movements, angles, and revealing the power of his punches and kicks.

The event was finalized by a face-off between the co-main event and main event headliners, each fighter probing each other’s temperament but demonstrating mutual respect at each other.