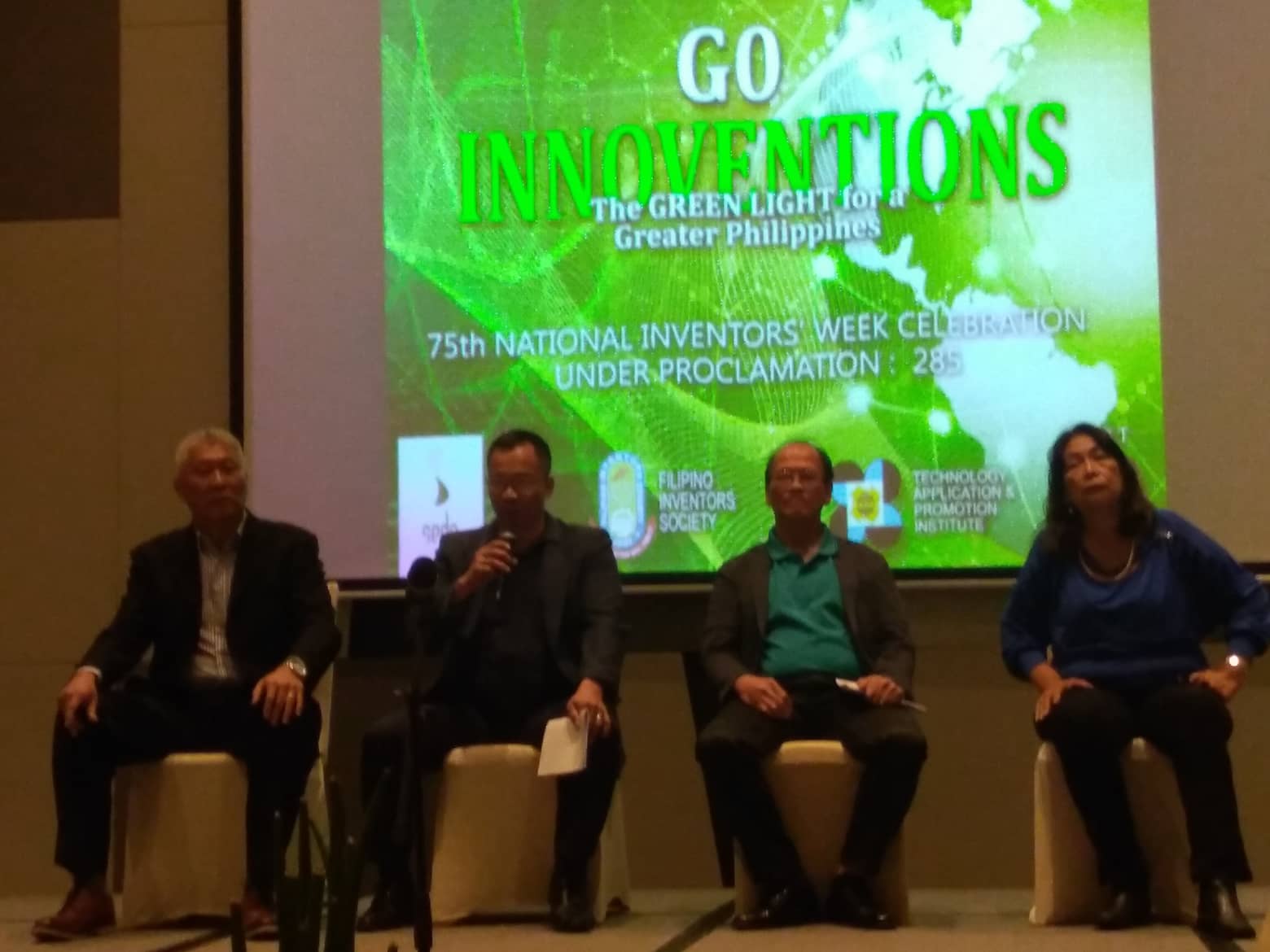 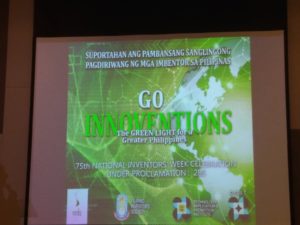 The Filipino Inventors Society (FIS) marks the 75th Diamond Year anniversary this 3rd week of November 2018 for the highlights of the celebration is the Dinner/ Award/ Fellowship Night at the SEDA Vertis North Hotel, to be attended by 200+ inventors all over the country with other distinguished guests.
Prior to the Investors Night, the FIS Planning Conglomerate has envisioned an eclectic program on 15-21 November 2018 featuring the much-awaited NATIONAL INVENTORS’ WEEK with the theme: GO INNOVATIONS! – The Green Light for a Greater PHILIPPINES at The Skydome, SM City North Edsa. This is in line of the Presidential Proclamation #285 of 1993 to showcase unique and marketable inventions of Filipinos to the Filipinos. 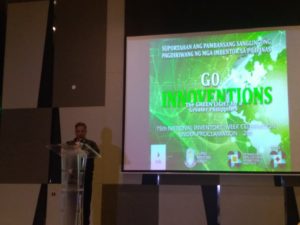 In line with this, the Officers and Conveners of the Filipino Inventors’ Society (FIS), who would like to seek the support of our dear President RODRIGO ROA DUTERTE to help mobilize our Inventors’ Innovations and Grand Caravan. The goal is to strengthen our support to PRRD administration’s quest for Inclusive growth and economic boost of the marginalized sectors like farmers, fisherfolk, urban poor, etc; Re-greening of the country’s air, land, and sea environments; Heighten ways to enhance and reduce costs of socialized housing construction; Upholding ways to enhance employment generation in the face of certain displacements in countries which do not provide equitable treatment to our co-Filipinos. 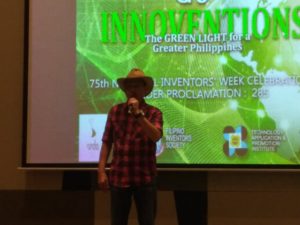 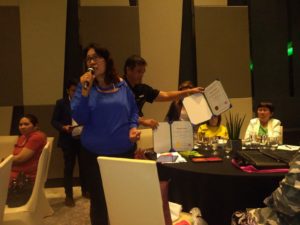 ABOUT THE FILIPINO INVENTORS SOCIETY
In the middle of World War II in 1943, the Filipino Inventors Society (FIS) was epically founded by an intrepid Imagineering triad: Teo Puruganan, Pastor Reyes-Torres, and Dalmacio Buenaventura. Subsequently incorporated in 1953 as a non-stock, non-profit NGO, FIS preponderatingly aims in promoting the interests of inventors and their work by providing assistance in developing, protecting, and locating markets for their inventions, utility models and industrial designs; diffusing information relating to industrial intellectual property; speaking for inventors nationwide; and, cooperating with similarly bent persons and entities.

Engaging achievements of FIS include the first National Exhibition of Inventions in 1957. This set the stage for Filipino inventors trying its hand lobbying Congress for the inclusion of invention development assistance in government’s priority agenda. In 1961, talks of setting up an inventors’ foundation were bandied about between FIS and inventors in government service no sooner than FIS advocated for a specialized government institution to assist inventors. Again it resorted to lobbying, this time for a protracted period of four years before the bill creating the Philippine Inventors Commission (PIC) was passed in 1964. PIC, the creation of FIS, was renamed Philippine Invention Development Institute (PIDI) in 1982. In 1967, FIS initiated and organized in cooperation with PIC the observance of the first Inventors’ Week, a week-long extravaganza wherein amateur and professional inventors competed for glory in a national contest of their exhibited inventions and innovations. In 1970, the PIC, in association with FIS, launched an educative initiative jump-starting innovative skills among the youth, a forerunner of the present Inventschool and Creativity Cram School flagship program by FIS affiliate Manila Innovation Development Society (MINDS), Inc., headed by FIS Director Virgilio Malang. Thereafter, the controversial Martial Law President Marcos, heeding a petition by FIS, issued Presidential Decree No. 1423 dated 1978 June 9, that: (a) created an Invention Guarantee Fund to assure the unsecured portion of industrial loans for the exploitation and manufacture of any registered Filipino invention, utility model or industrial design; (b) granted a five-year exemption from all taxes and fees for inventors in the manufacture and commercialization of their industrial IPs; and, (c) enabled financial aid for prototyping and patenting. FIS also secured Proclamation 187 that paved the way for the national annual observation of Inventors’ Week, a much-touted activity until 1988 when, consequent to the upheaval by the EDSA Revolution, President Marcos was deposed and replaced by Corazon Aquino. Among her first almost knee-jerk official acts was to abrogate PD1423 fondly reminiscent of the previous dispensation – and thereby effectively annulled all tax exemptions and simply abolished all incentives and privileges hard won by inventors for themselves. President Aquino further abolished PIDI and replaced it with the Technology Application and Promotion Institute (TAPI) under the Department of Science and Technology (DOST).
In time, devastated FIS members cast away their doomsday masks to face reality. They quickly regrouped and, under the FIS banner, marched back to their familiar trenches in Congress to fight for the passage of a legislation better than PD 1423 (with no inkling they would have to dig in their heels this time for a long haul – seven years!). Eventually, FIS pulled yet another coup with the passage of Republic Act 7459, also known as the Inventor and Inventions Incentives Act of 1992. Despite the title of the Act, however, incentives under its compromise provisions were not exclusively for inventions but for “technologies developed by local researchers or adapted locally from foreign sources including inventions”. This has underlain subsequent confusion in priorities. The other blot on this generally reassuring, even cheering piece of legislation, is that since its implementation, nobody, at least at FIS, seems to fully grasp how it operates. Hence, FIS has feverishly been petitioning for a revised set of implementing guidelines in simple, understandable terms which, hopefully, FIS and TAPI will cogently draft in the very near future.
FIS also linked up with the academe for research and development. It has standing agreements with the Polytechnic University of the Philippines and De La Salle University to provide members with an outlet for their commercial creations. FIS spearheaded the establishment of the Filipino Inventors’ Multipurpose Cooperative (FIMCOOP) with a retail store, products display, and office at Quezon City. For an extended period, FIMCOOP was headed by Chairman Virgilio Malang. To locate markets abroad for commercialized inventions and innovations of members, FIMCOOP established the Filipino Inventors Export-Import, Inc. whose incorporators include FIS Saudi Arabia Chapter.
Since it was established, FIS did not have a permanent place of business to call its own. Now, work has stalled but may soon resume on a planned Php30 million Philippine Invention Development Center (PIDC) funded by Congress, once more, at the instigation of FIS. The building shall serve as the national hub for the interaction of all inventors, including the unaffiliated and other IP rights holders and proponents. The multifaceted center will consist of four elements: (1) a national headquarters for the umbrella organization for national inventors, the FIS, its chapters and affiliates; (2) a conference center; (3) a permanent exhibition floor; and (4) a learning/resource center featuring a computerized library facility to serve as national storehouse of information on inventions and innovations. Further, FIS received assurance for another Php30 million for the purchase of research and development equipment for the facility. This is one mega plum for FIS.