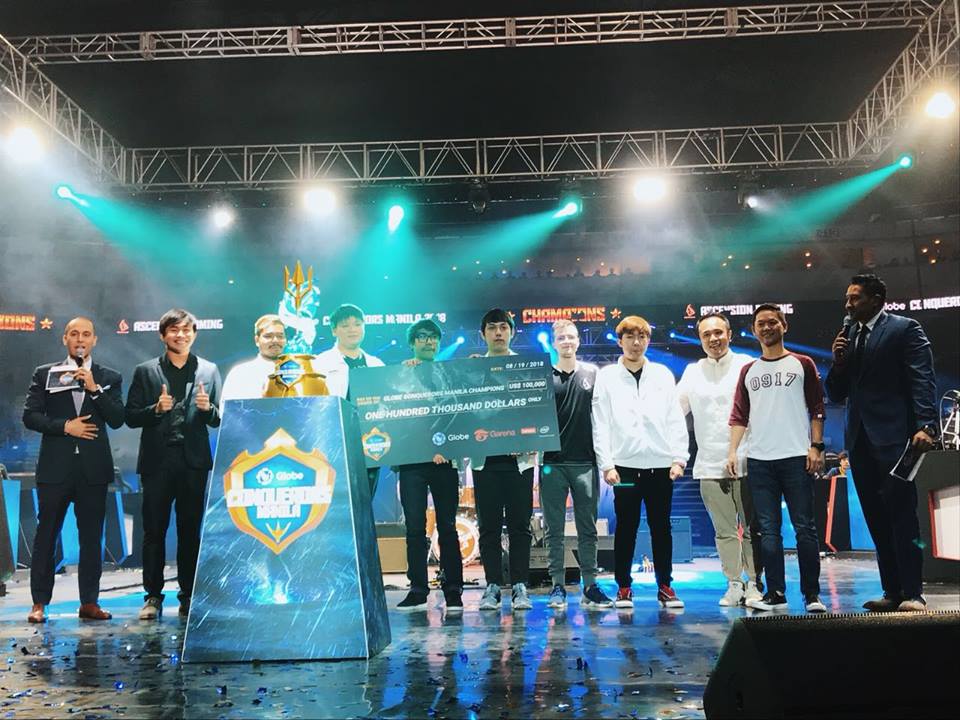 A Weekend of Thrilling E-Sports Action
Globe At Home kicks off FREE internet for League of Legends with HomeSurf promos
Thousands of gaming fanatics flocked to the Mall of Asia Arena this August 18-19 for the country’s biggest League of Legends event, Globe Conquerors Manila 2018! Presented by Globe and Garena, the major esports tournament saw 8 teams from Philippines, Thailand, Malaysia, Singapore, and Indonesia battle it out to become the best team in Southeast Asia. Gamers were also treated to the new HomeSurf promo of free internet for gaming from Globe At Home!

Electrifying regional playoffs
Thai powerhouse team Ascension Gaming rose to the top with a perfect 6-0 record. Fresh off their win at the Garena Premier League 2018 Spring in March, they gained unbreakable momentum and crushed Malaysia’s Kuala Lumpur Hunters in the semifinals and fellow Thai team MEGA ESports in the finals. They won the grand prize of $100,000 plus the coveted spot at the League of Legends World Championship in Korea as the Southeast Asian representative.
“All in all, Globe Conquerors Manila 2018 was a major success. There was a great turnout from LoL fans, amazing performances from all of the teams including the celebrities, and a world-class production befitting a world-class game. Pinoy gaming fans can definitely expect a Globe Conquerors Manila 2019,” said Jake San Diego, Globe Gaming Director.

Celebs compete for a cause
Fans didn’t tune in just for the SEA playoffs, they also cheered for their favorite celebrities as they returned to the Rift for Celebrity Showmatch 3! Team Ruby was comprised of Pinoy crooner Christian Bautista, popular international gaming streamer Cowsep, comedian Empoy Marquez, gaming vlogger Ashley Gosiengfiao, and Fliptop rapper Sinio. On the other end, Team Sapphire consisted of Baste Duterte, teen heartthrob Jack Reid, rapper Shehyee, Miss World 2013 Megan Young, and model/actor Mikael Daez.
What set this year’s Celebrity Showmatch apart from previous competitions was that they were playing for a cause, with event organizer Garena joining with the participating celebrity teams in contributing to the environmental group, Hineleban Foundation. Each champion, dragon, and baron take down adds P1,000, P5,000, and P10,000 respectively to the total donation pool. At the end, Team Ruby slayed their way to the top and a whopping P134,000 was raised for Hineleban.
“We are very thankful to Garena for supporting and highlighting our environmental sustainability policy through this exciting match. The generous cash donation will be used in planting 1,340 trees to save the country’s primary rainforests in Bukidnon,” said Yoly Crisanto, Globe Senior Vice President for Corporate Communications.

Free internet at home for gaming from Globe At Home Prepaid WiFi
Even after this weekend’s thrilling Conquerors saga comes to an end, Globe continues to power its customers’ gaming experience. With Globe at Home Prepaid WiFi, customers can enjoy FREE INTERNET for gaming apps like League of Legends and Arena of Valor with HomeSurf promos. They can access these games without having to worry about consuming their data allocation. All this for as low as P15!
Globe At Home Prepaid WiFi is available at Globe Stores, 7 Eleven, Ministop, and Abenson stores for only P1,999. Enjoy internet access at home that’s 2x faster, has 2x wider coverage and 2x stronger signal vs. MyFi.
This promo is also available for Homesurf15, Homesurf349, and HomeSurf599. For more information, visit broadband.globe.com.ph/prepaid-wifi.
Stay updated on the latest gaming promos by following Globe on Facebook and Twitter
For More Tech Lifestyle News and Features Visit us at Techbeatph.com and Visit our Youtube Channel here