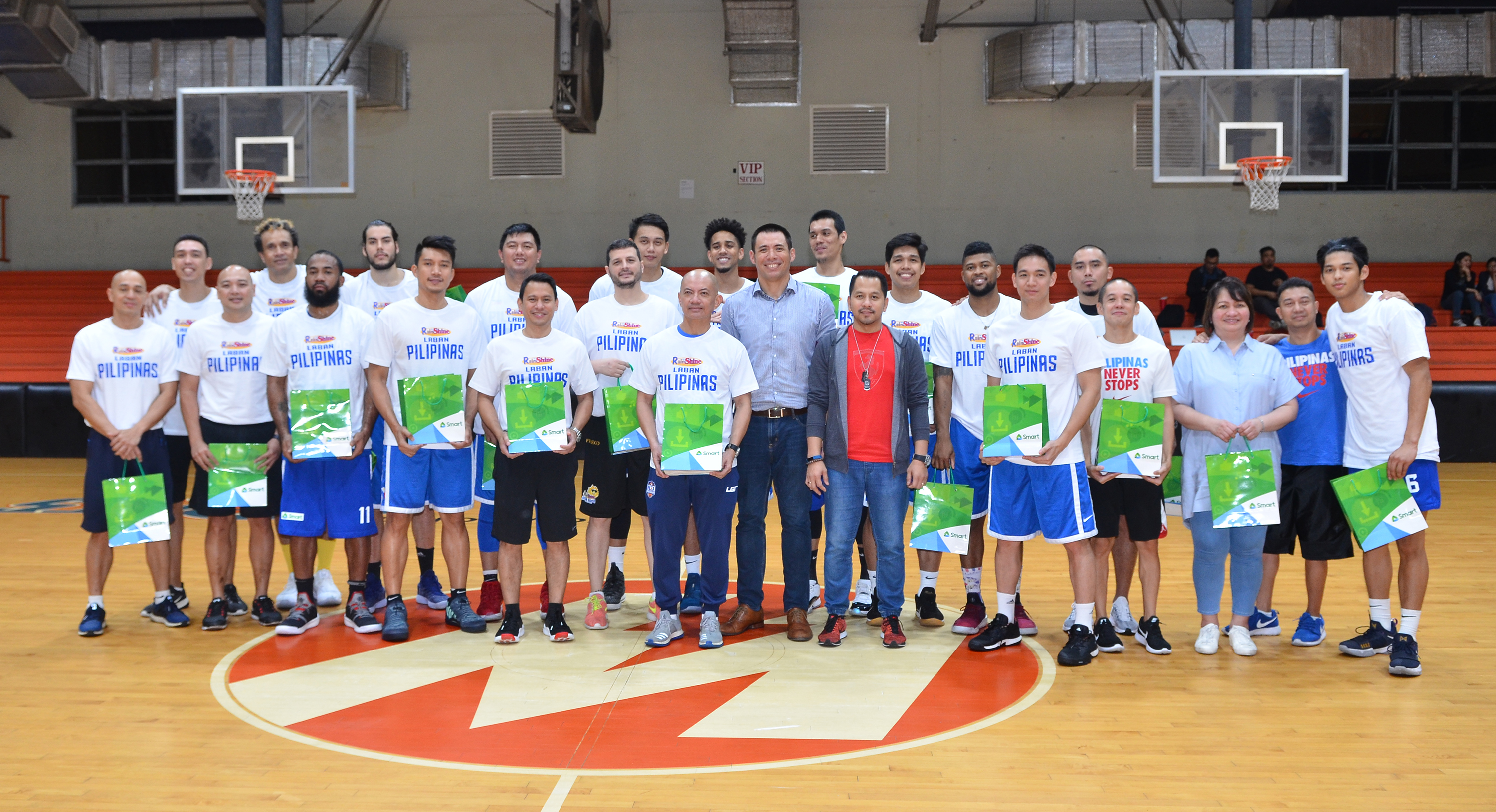 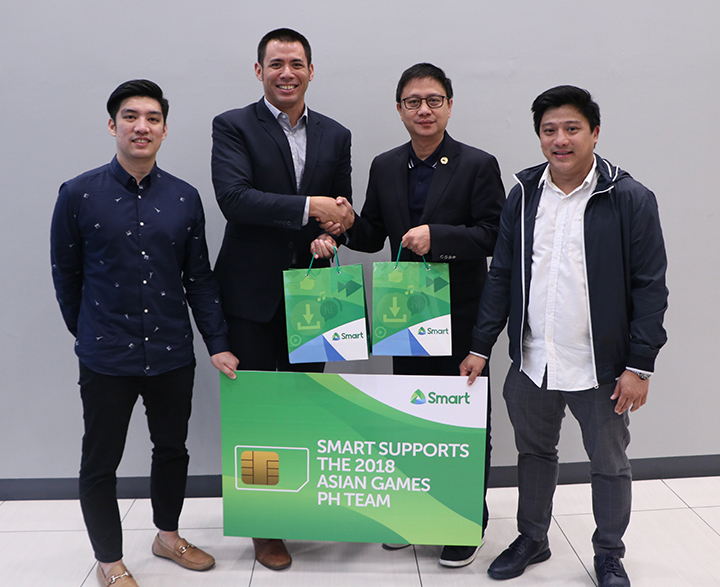 Smart pledges support to Filipino athletes competing at the 2018 Asian Games. Photo shows (L-R) Paolo Dizon from Smart Sports Marketing, Gabby Cui of Smart’s Community Development and Partnerships, Patrick Gregorio of the Philippine Olympic Committee and Epok Quimpo of Smart Sports Marketing.
PLDT wireless subsidiary Smart Communications (Smart) continues to support athletes representing the country in the international arena, this time providing communication and connectivity support to the Philippine national team competing at the 2018 Asian Games in Indonesia.
Composed of more than 270 athletes, the Philippine team is set to face the best Asian athletes in Jakarta and Palembang from August 18 to September 2.
Smart, through the Philippine Olympic Committee (POC), turned over Smart Prepaid LTE SIMS and load cards that the Filipino athletes can use on Smart World Data Roaming Manager – an international service that Smart subscribers abroad can access to easily manage mobile internet usage.
POC Secretary General Patrick Gregorio believes that the communication support is essential to the delegation’s performance.
“The success of the Filipino athlete would depend on the support of the Filipino people. We need that communication line para solid ang suporta natin,” said Gregorio.

Smart sends off national basketball team
The Philippine national basketball team players and coaches together with Smart Head of Community Development and Partnerships, Gabby Cui and PLDT Global Head of International Retail Business, Jojo Quiamas during the turnover of the Smart Prepaid SIMs and load cards.
During the send-off practice before the team flew to Indonesia, Smart committed its support to the Philippine national men’s basketball team, pledging connectivity for the players during the tournament. They were provided Smart Prepaid SIMs and load cards, plus premium access to Free Bee, an app that delivers crystal-clear calls to the Philippines for free, without requiring internet connection from their families back home.
After a few challenges just days leading to the Asian Games, the team is now ready to raise the Philippine flag with the last-minute inclusion of Filipino-American NBA star Jordan Clarkson raising hopes for a medal finish.
Asked about their preparation for the games, Assistant Coach Ricky Yumayang said that the team has been training rigorously.
“Given the time constraints that we’re facing, we are working hard every day to practice and hone our skills with Coach Yeng Guiao. Everything is going as planned,” Yumayang said.
“Right now, we are doing our best to take care of ourselves mentally and physically, so we can achieve our goal as early as the first round,” said veteran basketball player Asi Taulava.
Representing the country together with Clarkson, the all-star roster consists of Rain or Shine Elasto Painters’ Maverick Ahanmisi, Raymond Almazan, Beau Belga, Chris Tiu, Gabe Norwood, and James Yap, Magnolia Hotshots’ Paul Lee, San Miguel’s Christian Standhardinger, GlobalPort Batang Pier’s Stanley Pringle, Blackwater Elite’s Poy Erram, and NLEX Road Warriors’ Asi Taulava.
Staying connected with Smart
Despite being abroad for several days, the players won’t have to worry about keeping in touch with their families and fans back in the Philippines.
“We believe that these tools give them a unique advantage which will allow them to communicate with their families even away from home,” said Gabby Cui, Smart assistant vice president and head of community development and partnerships.
The athletes will also be able to subscribe to any Data Roaming Pack via Smart World’s Data Roaming Manager wherever they are in the world and they will also be able to monitor their Roaming Data Usage real time.
Family men
For Rain or Shine Elasto Painters’ point guard and family man Chris Tiu, staying connected with his loved ones whenever abroad has been helpful for his peace of mind, and overall career. As a father, he has to check on his kids most of the time.
“Nowadays, having a reliable internet overseas definitely take off some stress,” Tiu said. “I do not feel so far from home, thanks to technology available today.”
Another family man in the team, Gabe Norwood, finds the support given by Smart consistent and unyielding.
“Smart has done a great job ever since our program started. They’ve been right there with us hand in hand,” Norwood exclaimed.
When asked if he will be able to benefit from the connectivity that Smart brings during the Asian Games, Norwood said that keeping his communication line open is vital as a father. “I want to be with my kid as much as I can. Even FaceTime counts!”
In the last edition of the Asian Games in 2014, the Philippine basketball team finished with a 3-4 record landing them to the seventh spot. This year, the team will play in Group D together with Kazakhstan and China.
For More Tech Lifestyle News and Features Visit us at Techbeatph.com and Visit our Youtube Channel here