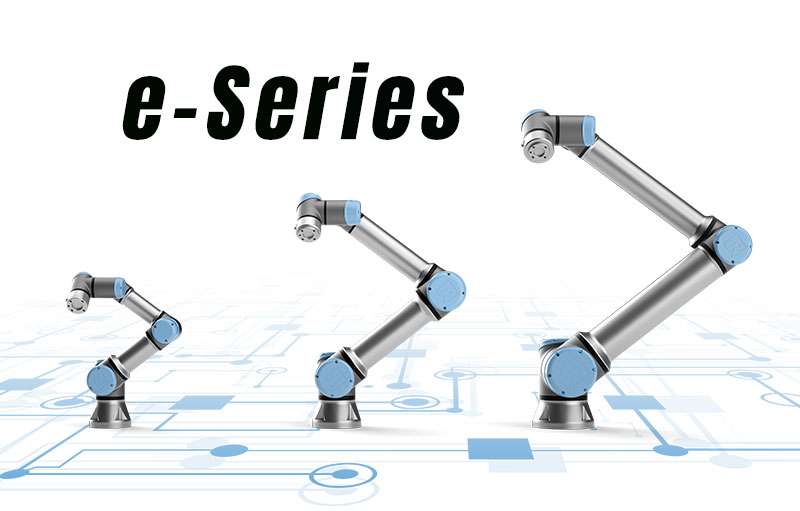 The Philippines, 26 July 2018 – Universal Robots, the pioneer and market leader of collaborative robots (cobots), is continuing to evolve its ground-breaking, collaborative automation technology with the introduction of its new flagship e-Series cobots. The new range follows Universal Robot’s co-founder, Esben Østergaard being awarded the 2018 Engleberger Award, the ‘Nobel Prize’ of robotics.

This new e-Series cobot platform includes technology advances that enable faster development for a wider variety of applications. Improvements include the ability to economically address even more applications, thanks to greater precision and sensitivity provided by a built-in, tool-centric Force/Torque sensor.

Like other Universal Robots offerings, the new e-Series offers unparalleled convenience. It takes just one hour to unpack the cobot, mount it and program the first task. A wrist-join-tool communication interface reduces production line integration time and complexity. Meanwhile, from a service standpoint, all joints can be replaced in 2 to 6 minutes.

Looking at the big picture, e-Series users can expect a fast return on investment, a cobot system ready for any future application, and long-term productivity gains.

“Our e-Series platform is leveraging our years of experience as the market leader within collaborative robots,” says Jürgen von Hollen, President of Universal Robots. “The ‘e’ in e-Series underpins our key vision and overall product philosophy, specifically Empowering people and making it Easy for Everyone.”

Growing Importance of Automation in The Philippines

Demand for automation and robotics continues to grow in the Philippines, particularly in the automotive, electronics and food & beverage industries.

Electronics is among the top export sectors in the Philippines, contributing USD 8.69 billion in the first quarter of 2018[1] and a high adopter of cobots.

The Philippines’ Department of Trade and Industry (DTI) recognises the importance of electronics and the manufacturing sector and, in line with Industry 4.0, has introduced the Inclusive Innovation Industrial Strategy or i3S to sustain the sector’s robust growth. i3S includes training and upscaling of skills, developing or adapting available technologies and improving operational efficiency to meet global demands and opportunities[2].

This is timely as the Philippines was ranked among the lowest in the region by the International Federation of Robotics for automation adoption with a robot density of three industrial robots installed per 10,000 employees in 2016, behind Singapore, Thailand and Malaysia.

“End-users with complex applications and diverse or uncertain future needs will benefit from the e-Series platform and our unique Universal Robots+ ecosystem knowing that their investment will be able to grow with them as their needs change,” added von Hollen. “We enable innovative customers to rapidly drive adoption of automation technology into their businesses to maximise their competitive advantage.”

The e-Series is now available. Universal Robots plans to begin shipping units to customers from 1 August 2018.

About Universal Robots
Universal Robots was co-founded in 2005 by the company’s CTO, Esben Østergaard – the 2018 Engelberger Award Winner – who wanted to make robot technology accessible to all by developing small, user-friendly, reasonably priced, flexible industrial robots that are safe to work with. Since the first collaborative robot (cobot) was launched in 2008, the company has experienced considerable growth with the user-friendly cobot now sold worldwide. The company, which is a part of Teradyne Inc., is headquartered in Odense, Denmark, and has subsidiaries and regional offices in the United States, Germany, France, Spain, Italy, Czech Republic, Turkey, China, India, Singapore, Japan, South Korea, Taiwan and Mexico. In 2017, Universal Robots had a revenue of USD 170 million. For more information, please visit www.universal-robots.com or read our blog at blog.universal-robots.com.